This is the second post of a four-part series on India-Pakistan 1971 War. First part can be  read here 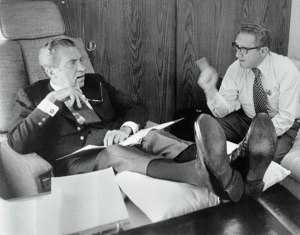 Richard Nixon (left) and Henry Kissinger, two most controversial figures of the 1970s

Six days after Pakistan Army began massacring its own people, a meeting on the East Pakistan Crisis was held in the White House Situation Room.  It was chaired by Henry Kissinger, the US National Security Adviser and President Richard Nixon’s right-hand man when it came to the American foreign policy. Kissinger, a former Harvard academic, was brilliant, ruthless and extremely powerful. Perhaps the most controversial figure in the American foreign policy of the time, he was an ardent worshipper of realpolitik in foreign policy, which often translated to celebrating cold-blooded calculations.

On this day, the calculation was about East Pakistan and Yahya Khan. A week into the crisis, Kissinger and his boss, Nixon, had already made up their mind to stay out. Despite the mounting reports of a bloodbath coming in from their own consulate in Dacca, the mood in White House was to let Yahya do what he wanted.  In the meeting, Kissinger’s main concern was whether Pakistan Army could actually succeed or not. As the meeting progressed, Kissinger asked about the people killed in Dacca University. “Did they kill Professor Razak? He was one of my students.” He was informed by a CIA official that Razak probably had been killed. Kissinger, apparently referring to the previous rulers of South Asia, replied, “They didn’t dominate 400 million Indians all those years by being gentle.”

This detached statement perfectly represented the American attitude towards the East Pakistan genocide. And it was about to get worse.  Within a month, US will shed its disinterested neutrality and will actively begin aiding Pakistan in the massacre. Why? Because Nixon and Kissinger were secretly working on a project to change the world.

END_OF_DOCUMENT_TOKEN_TO_BE_REPLACED

“China has many people. They cannot be bombed out of existence. If someone else can drop an atomic bomb, I can too. The death of ten or twenty million people is nothing to be afraid of,” Mao tells a shocked Nehru.

On 25 November 1950, the 300,000 men of the Chinese Army attacked the Americans in North Korea. Carrying off one of the biggest surprise attacks in the history of warfare, the Chinese action shook the entire world. But in New Delhi, Jawaharlal Nehru was more frustrated than shocked. He had been warning the Americans for weeks that this would happen, but Washington had ignored him. And now world’s most powerful nation was at war with the world’s biggest country. On one side was the US, threatening to use the atomic bomb. On the other side was Chinese dictator Mao, saying that a few nuclear weapons were hardly going to make a dent in the vast Chinese population. It was a nightmare scenario; the whole world could be swallowed by Third World War at any moment. Stuck in the middle of it all, Nehru commented “the world is determined to commit suicide”

The Korean War was perhaps one of most dangerous moments of the Cold War, fuelled by ideological conflict, geopolitical jealousies and general stupidity. At the end of Second World War in 1945, like the world, Korea was divided by the Soviet Union and the United States into two countries- one communist and one democratic. However, desire of a united Korea persisted, particularly in the mind of North Korean dictator Kim Il-Sung (grandfather of the current North Korean dictator). On 25 June 1950, North Korea invaded South Korea, causing the United States to immediately jump in the war, dispatching troops under the banner of United Nations.