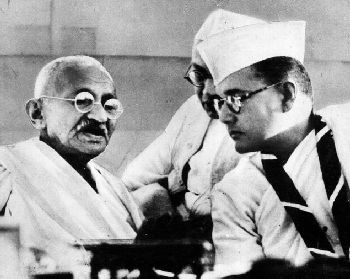 On 29 January 1939, as Subhas Chandra Bose sipped tea at a party in Calcutta celebrating the wedding of his eldest nephew, his mind was elsewhere. As the Bose family engaged in festivities, votes were being counted across the country for the election of Congress Party’s Presidency. For Bose, it was a make or break moment. He had positioned himself as a challenger to the party establishment and gone against some very powerful people. The electoral contest had been bitter, with dirty tricks and harsh invectives being hurled by both sides. By the day of the election, it had become a nail-biter. As early trends poured in, Bose allowed himself to relax. Province after province began to turn his way – Bengal, United Provinces, Assam and a sweep of the South. To those who called in to congratulate, he happily declared, “we are winning”.

Two thousand kilometers away, on the other coast of India, Mahatma Gandhi was meeting with peasants of Bardoli, Gujarat, as election results trickled in. This frail-looking man dressed only in loin cloth was the most powerful politician in India. For the last two decades, he had single-handedly picked men to run the Congress Party. Although his modesty would have never allowed him to admit it, often a mere nod from Gandhi had been enough for leaders to become Party Presidents unopposed. Now, however, it seemed that the unchallenged hegemony of Bapu was coming to an end. His name did not appear on the ballot, but everyone had known that this election was between Bose and him. And the people wanted Bose. By the end of the day, Bose had won the election with 1,580 votes against his opponent’s 1,375. There are no records of this, but one can easily imagine Gandhi going about his daily chores after hearing the news, not showing any signs of distress. Yet it is likely that he knew that this battle was far from over. In fact, it was just beginning. END_OF_DOCUMENT_TOKEN_TO_BE_REPLACED