“China has many people. They cannot be bombed out of existence. If someone else can drop an atomic bomb, I can too. The death of ten or twenty million people is nothing to be afraid of,” Mao tells a shocked Nehru.

On 25 November 1950, the 300,000 men of the Chinese Army attacked the Americans in North Korea. Carrying off one of the biggest surprise attacks in the history of warfare, the Chinese action shook the entire world. But in New Delhi, Jawaharlal Nehru was more frustrated than shocked. He had been warning the Americans for weeks that this would happen, but Washington had ignored him. And now world’s most powerful nation was at war with the world’s biggest country. On one side was the US, threatening to use the atomic bomb. On the other side was Chinese dictator Mao, saying that a few nuclear weapons were hardly going to make a dent in the vast Chinese population. It was a nightmare scenario; the whole world could be swallowed by Third World War at any moment. Stuck in the middle of it all, Nehru commented “the world is determined to commit suicide”

The Korean War was perhaps one of most dangerous moments of the Cold War, fuelled by ideological conflict, geopolitical jealousies and general stupidity. At the end of Second World War in 1945, like the world, Korea was divided by the Soviet Union and the United States into two countries- one communist and one democratic. However, desire of a united Korea persisted, particularly in the mind of North Korean dictator Kim Il-Sung (grandfather of the current North Korean dictator). On 25 June 1950, North Korea invaded South Korea, causing the United States to immediately jump in the war, dispatching troops under the banner of United Nations.

END_OF_DOCUMENT_TOKEN_TO_BE_REPLACED

Sorry for disappearing for so long. I have been working on another very exciting project to popularize history that I hope to share with you guys soon. In the meantime, this post is a by-product of my struggles of re-educating myself of my own mother tongue.

Before the middle of nineteenth century, Hindi had no patrons in India. The language was essentially a collection of dialects spoken in large swathes North India, but it held no formal recognition. Mughal Empire used Persian as the official language, which the British Raj had continued to a certain extent. Parallel to it were the native courts, which used Sanskrit. Sanskrit was an exclusive domain of the Brahmins, incomprehensible to both British and common Indians. Brahmins were happy hold back its spread to ensure their own continued influence.

The first political patrons for Hindi emerged from the Hindu-Muslim antagonism that was building up in the country in late 1800s. These promoters of the language saw Hindi as a tool to counteract the influence of Muslims who spoke and read Urdu. The initial attempt was spread Hindi as far as possible, in effort to claim most population and regions as Hindi speaking. Since Hindi was such a vague, ill-defined group of dialects, an easy way to do this was claim other languages as Hindi. The direct victims of this strategy became border regions like Rajasthan, Bihar, Himachal and Uttarakhand. Many linguist experts maintain that Rajasthani, Bihari and Pahari should be a different language group. But all this was swept aside in a campaign to spread Hindi. So, for instance, in 1881 Bihar Government adopted Hindi as the sole official language of the state, ignoring, not only Urdu but also Maithili, Bhojpuri etc. A lot of government work and education programmes were transferred to Hindi medium. Over the decades, this situation ensured that most Biharis, regardless of their mother tongue, end up becoming Hindi speakers. Such efforts continued across North India, with much success, except in Punjab, where Sikhs, with the force of their religion, were able to consolidate a counteracting force.

END_OF_DOCUMENT_TOKEN_TO_BE_REPLACED

A Map of Princely States in Gujarat, leftover from British India. Junagadh is the state in red at the southern tip of Gujarat (click to enlarge)

In the run-up to the Indian Independence 600-odd princely states, another legacy of the British Raj, were being divvied up between India and Pakistan. In the last few months of British India, Sardar Vallabhbhai Patel and Lord Mountbatten were trying convince, cajole, bribe or threaten all the state princes into submission. Remarkably, by 15 August, Indian Government had managed to get almost all of them in line; only three states ended up proving to be troublesome – Kashmir, Hyderabad and Junagadh.

Of these the story of Junagadh turned out to be the most absurd, as if a farce mockery of the upcoming Kashmir and Hyderabad crises. It was a state on the southern-tip of Gujarat within a region called Kathiawar. The region was peppered with tiny states, as can be seen in the map on the right (click to enlarge). Junagadh itself contained dozens of petty estates and sheikhdoms within it. In fact the situation was so confusing that it took the Government of India several weeks just to figure out the correct borders before they could formulate a military plan. Moreover, the government lawyers couldn’t figure out whether these tiny sheikhdoms were legally independent or under the suzerainty of Junagadh even after the accession. But Junagadh was an important state, with a population of 700,000, 80% of them Hindus and, predictably, ruled by a Muslim prince.

The Nawab of Junagadh was an eccentric character, famously obsessed with dogs. He was said to have owned 800 of them, each with its individual human attendant. When two of his favourite dogs mated, he is said to have spent Rs. 20-30 lakhs in “wedding” celebrations, and proclaimed the day as State holiday. It is no surprise that the actual governing of the Junagadh was carried out by his dewan (Chief Minister). In the last months of British India his dewan was a Muslim League politician named Shah Nawaz Bhutto (father of future Pakistani Prime Minister Zulfikar and grandfather to Benazir Bhutto).

END_OF_DOCUMENT_TOKEN_TO_BE_REPLACED 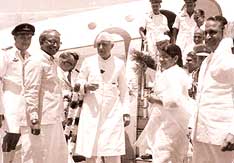 The political crisis that unfolded in Kerala exactly a decade after independence was probably (one of the) first true litmus test for the Indian democracy- a test that the country certainly did not pass. It was a political clash involving violence, ideologies, populism, religion and ethnicities in which no actor was blameless, a political theatre that has been repeated innumerable times since. It is also a personal story, one of leaders – all of whom with the best of intentions – struggling with forces bigger than themselves.

In 1957, the Communist Party of India won Kerala’s assembly elections by a slim majority, forming the first communist state government in the country. At the height of Cold War (five years to Cuban Missile Crisis), this generated tremendous interest from around the world as one of the first democratically-elected communist governments. There were concerns within India as well including New Delhi.

However, Jawaharlal Nehru, having just returned as Prime Minister in the second national elections, had no qualms. While he saw Indian communists as out of step with contemporary India, he was willing to give the new democratically-elected state government a chance. He was further reassured by the communist party’s promise to act within the constitutional bounds.