A Map of Princely States in Gujarat, leftover from British India. Junagadh is the state in red at the southern tip of Gujarat (click to enlarge)

In the run-up to the Indian Independence 600-odd princely states, another legacy of the British Raj, were being divvied up between India and Pakistan. In the last few months of British India, Sardar Vallabhbhai Patel and Lord Mountbatten were trying convince, cajole, bribe or threaten all the state princes into submission. Remarkably, by 15 August, Indian Government had managed to get almost all of them in line; only three states ended up proving to be troublesome – Kashmir, Hyderabad and Junagadh.

Of these the story of Junagadh turned out to be the most absurd, as if a farce mockery of the upcoming Kashmir and Hyderabad crises. It was a state on the southern-tip of Gujarat within a region called Kathiawar. The region was peppered with tiny states, as can be seen in the map on the right (click to enlarge). Junagadh itself contained dozens of petty estates and sheikhdoms within it. In fact the situation was so confusing that it took the Government of India several weeks just to figure out the correct borders before they could formulate a military plan. Moreover, the government lawyers couldn’t figure out whether these tiny sheikhdoms were legally independent or under the suzerainty of Junagadh even after the accession. But Junagadh was an important state, with a population of 700,000, 80% of them Hindus and, predictably, ruled by a Muslim prince.

The Nawab of Junagadh was an eccentric character, famously obsessed with dogs. He was said to have owned 800 of them, each with its individual human attendant. When two of his favourite dogs mated, he is said to have spent Rs. 20-30 lakhs in “wedding” celebrations, and proclaimed the day as State holiday. It is no surprise that the actual governing of the Junagadh was carried out by his dewan (Chief Minister). In the last months of British India his dewan was a Muslim League politician named Shah Nawaz Bhutto (father of future Pakistani Prime Minister Zulfikar and grandfather to Benazir Bhutto).

Before independence, the Nawab had been assuring Indian government that it had every intention of joining India. But unbeknownst to Sardar Patel, Junagadh leadership was in communication with the Pakistani government. Bhutto was being courted by Jinnah to switch sides. And so on 15 August, as independence rolled around, Junagadh declared itself acceding to Pakistan. The Indian government didn’t even hear about it until it was published in the newspapers on 17 August!

Surprised, it sent a message to Pakistan, asking them to reject Junagadh’s offer of accession. There was no response. A few days later, Pakistan declared that it was accepting Junagadh’s accession. It was decided in New Delhi to pressurize Junagadh into reversing their decision. This began by putting an embargo on the state by stopping the supplies of essential items like food and coal. Indian troops were deployed around the region as a show of strength. Rattled, Bhutto wrote to Jiinah, asking for financial and military help, and preferably some air support.

New Delhi also dispatched VP Menon, a civil servant who had taken a demotion to be the point man of whole state integration project, to Junagadh. There he was met by Bhutto. He tried to convince Bhutto the absurdity of joining Pakistan which had no connection with Junagadh by land. Bhutto dismissed it saying that the two were connected by the sea (300 miles between port of Veraval and Karachi). Besides, Bhutto continued, it was only a matter of time before communists took over Congress and it was in the best interest of Junagadh to stay away from such trouble. Dismayed, Menon returned empty-handed.

At this point, several confusing threads began unfolding in parallel. In Rajkot, Samaldas Gandhi (a nephew of Mahatma) established a provisional government with the plan of starting an insurrection against the Nawab. While later the Indian government claimed to have nothing do with the insurrection, it may very well be that it was Menon who had given Gandhi the go-ahead. Parallel to it, another tiny state Manavadar bordering Junagadh started suggesting that it might go over to Pakistan as well. Meanwhile, two tiny estates within Junagadh – Babariawad and Mangrol – consisting of fifty villages each, declared their independence from Junagadh and their decision to accede to India. As a response, Bhutto sent his forces into these estates to take control of them.

In New Delhi, the issue proved to be divisive. Sardar Patel was in favour of using military force since Junagadh’s “invasion” of Babariawad and Mangrol could be construed as an “act of war”. But Jawaharlal Nehru was reluctant to use force since it would mean a war with Pakistan, which would prove to be very costly for India. (At this point he had no idea that Pakistani preparations for the tribal invasion of Kashmir were already underway.) To complicate the matters further, India’s chiefs of staff submitted a white paper to the cabinet saying that in the event of a war with Pakistan, the British officers (still serving in the Indian army) will not stand down, since they could not fight against the British officers serving in the Pakistani Army. The Indian leaders were outraged at this, saying that military chiefs were exceeding their bounds. The next day Mountbatten convinced the military chiefs to back down and the showdown between the military and the government was averted. By end of September, Nehru had decided to surround Junagadh with army and navy but not to use force. Meanwhile, he continued to pressurize Pakistani government to come to terms over the issue.

Over the month of October, conditions worsened in Junagadh which was fast running out of food and other essentials under Indian embargo. Meanwhile, Gandhi’s provisional government had started their insurrection, taking over some towns of state. The whole drama also acquired communal overtones and risk of Hindu-Muslim riots in Kathiawar heightened. As the situation worsened, the Nawab decided to flee to Pakistan, taking all the money in the state treasury, most (but not all) of his wives and some of his dogs, with him. Bhutto was left in charge of the state. 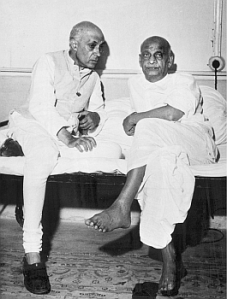 Pandit Nehru and Sardar Vallabhai Patel. Differences between the two are often made more than they actually were

Bhutto kept on asking Pakistan for military and financial assistance, but the help never came. This was because of the fact that, before independence, Jinnah had not been properly briefed about the disarray Pakistani military was in after the partition by his (British) military chiefs. It was only around this time that he was realising how weak Pakistani army was. Moreover, in the preparation of the Kashmir operation, Pakistani military stores had become very low. Pakistan had nothing to help Junagadh with.

Matters come to fore in late October, as the conflict in Kashmir erupted. With Nehru’s unwillingness to go to war with Pakistan was now immaterial. The Indian government became more willing to use force in Junagadh. The news had been coming of harassment of Hindus by the Khan of Manavadar, the tiny state which had been threatening to go over to Pakistan. Government, in no mood to be trifled with, sent a small force to take over the state on 22 October.

Then on 1 November, forces were dispatched to take over administration of Babariawad and Mangrol. Junagadh forces had already fled, hours before Indian troops reached these estates. But Indian government still held back from a full-fledged invasion of Junagadh. After holding out for a week, Bhutto eventually relented on 8 November, offering India to take over the reins of Junagadh. Government administrator reached Junagadh on 9 November, only to discover that Bhutto had already decamped for Pakistan.

A plebiscite was eventually held to decide what the people wanted. The result was 1,90,870 for India, 91 for Pakistan. A few months later, the Nawab also proposed to come back to India, but the Indian High Commissioner in Pakistan was instructed to ignore him. His dogs were later sold off or put down. They had been costing the government Rs. 16,000 a month to maintain.

From the start, Junagadh’s accession to Pakistan was just a fantasy, not a practical possibility. Yet it ended up becoming a great argument Pakistan in international forums. Here was a state which India had forcibly occupied against the wishes of its Muslim ruler, claiming to protect the Hindu population. In Kashmir, opposite was true. There India claimed to be upholding its agreement with a Hindu king while disregarding the sentiments of a Muslim population. Pakistan continued show Junagadh as part of it in its maps well into 1950s. Meanwhile, Indian side maintained that India had not invaded Junagadh, but had taken it over only after Nawab’s government had completely collapsed.

In the end, these are merely political arguments. At the end, fate of these disputes was sealed by military power. As Sardar Patel had observed while discussing Junagadh, in such cases “possession is nine-tenths of the law”.

12 thoughts on “Accession of Junagadh: Farce of History”