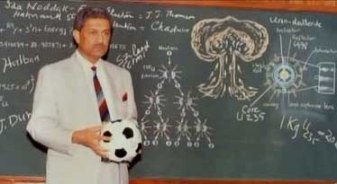 AQ Khan with design of neutron initiator, which serves as the kick-start mechanism for a nuclear chain reaction

In December 1975, a thin man with a light moustache landed at the Karachi Airport, where he was awaited by a top Pakistani Military general. He had three large suitcases with him, all stuffed with photographed and hand-written documents that he had stolen from a Dutch lab where he worked as a translator. These documents were technical designs of a revolutionary new technology to make a nuclear bomb. His name was Abdul Qadeer Khan. He was here to make, as the world would come to know of it, the first Islamic Bomb.

In July 1974, AQ Khan had written to the Pakistani Prime Minister Zulfikar Ali Bhutto, offering to build a nuclear bomb for Pakistan. The timing of the letter had been perfect, for only two months ago India had exploded a nuclear bomb of its own, which had thrown Islamabad into a tizzy. Pakistan had been trying to develop its own nuclear bomb since 1958, but had consistently failed because of the lack of money and the technical know-how. The Pakistan Atomic Energy Commission (PAEC) was still many years away from developing a bomb. So the letter from this unknown mining engineer had come as a god-sent for Bhutto.

Pakistan had been trying to develop a nuclear bomb through Plutonium, which is a very expensive and difficult exercise. What AQ Khan offered, instead, was building the bomb with Uranium-239, enriched through centrifuges, which was a cheaper and quicker process. This enrichment technology was just being developed by a European Consortium called UNRECO, where AQ Khan worked as a translator. His job offered him unlimited access to the technical information, which he was willing to steal and bring to Pakistan.