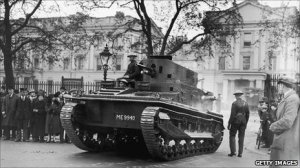 In May 1926, 1.7 million British workers went to strike. It was the only general strike in the British history. The strike lasted nine days and was ultimately a bust. Nevertheless, it made the government immensely unpopular. Fearing defeat at the hands of the Labour Party in the next election (still three year away), the Conservatives began preparations for losing power in 1929.

A part of this preparation related to India. The Government of India Act 1919, the law through which British ruled India, was set to expire in ten years and was supposed to be reviewed and renewed in 1929. That meant that the review would have been carried out by a leftist Labour Party Government which had always been favourable to Indian nationalist cause. The Conservatives feared that in a wave of idealism, the socialists may end up giving Indian nationalists too much. To pre-empt this, the Conservative Government hastened the review process and sent a Commission of British Parliamentarians under Sir John Simon to India in early 1928.

The timing of the Simon Commission put it smack in the middle of growing divisions within the Congress Party. At the time, the party was witnessing ideological struggle between its moderate and the extremist wings. On one hand were the old leaders, Mahatma Gandhi and Motilal Nehru, who wanted to get autonomy while keeping India within the British Empire. On the other were young, emerging leaders like Jawaharlal Nehru, who wanted much more. As we will see, the Simon Commission ended up impacting these divisions in very strange ways, and eventually resulted in the Congress Party calling for complete independence for the first time in its history. END_OF_DOCUMENT_TOKEN_TO_BE_REPLACED